Ever since Bugatti released its latest model Chiron, it has been the show stopper, literally everywhere! Be it with its muscular looks or its raw power. It packs a massive punch with its magnificent 16-cylinder W16 engine producing 1500 HP of power, it is surely the most powerful on road production from Bugatti. This beast is electronically tweaked to max-out at an astonishing 261mph or 420 kph. Damn, that is fast! Also, the driving experience is incomparable and the road grip is the best out there. Let's see how this beast of a car fares against some of the other speedsters of the world! 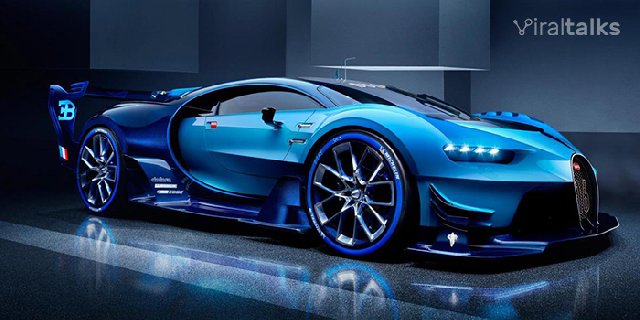 Also Read: OMG! World’s Most Expensive Cars are Beyond Imagination! Here are Top 10! 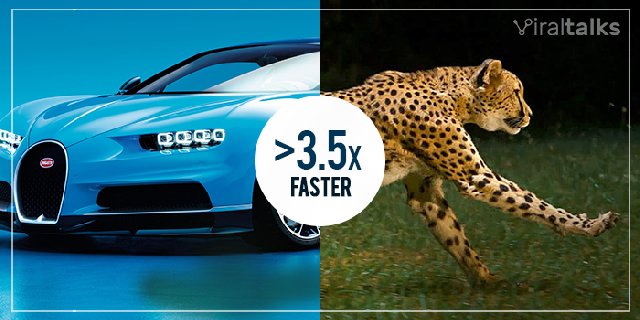 The Cheetah being the fastest land animal, can reach tap speeds of up to 120 kph (64 mph), albeit only for a short period of time, to the likes of 8 minutes. Chiron, on the other hand, can reach 420 kph (261mph) and hold it for as long as you want. Here we know who the winner is!

2. Bugatti Chiron is 1.2 times faster than the most destructive Tornado [Daulatpur–Saturia tornado] 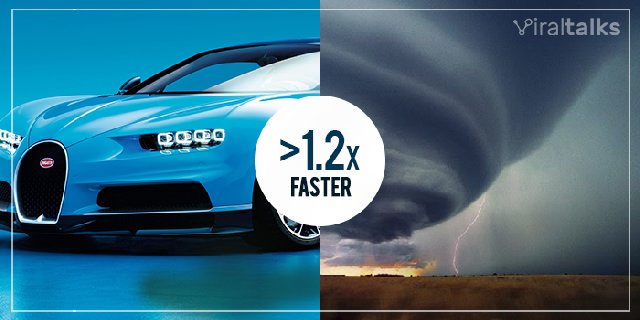 A tornado is a massive whirl of wind traveling through a particular area, and the most destructive one ever recorded was in the country of Bangladesh. The Daulatpur–Saturia tornado reached wind speeds of about 350 kph (217 mph) and took 1300 lives. Yet, it doesn't match up against Chiron's incredible speed! 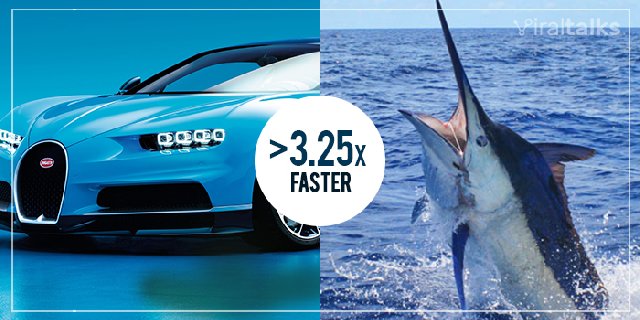 The fastest animal under water has to be the Black marlin which clock speeds of 129 kph (80 mph). Alas, it isn't good enough to go against the new Bugatti! 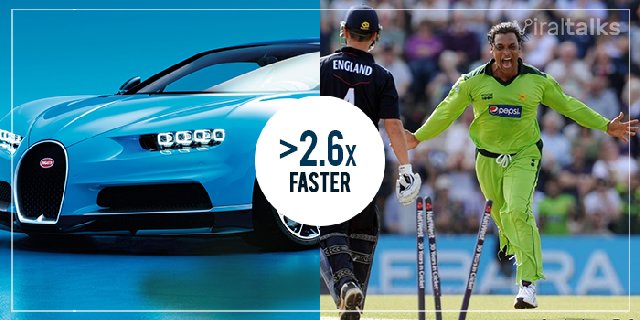 Pakistan's retired fast bowler, also called the Rawalpindi Express is the fastest bowler the world has ever seen. His delivery against England on 22 February 2003 in the world cup match reached a speed of 161.3 km/h (100.23 mph). So does that compare to the latest Bugatti? 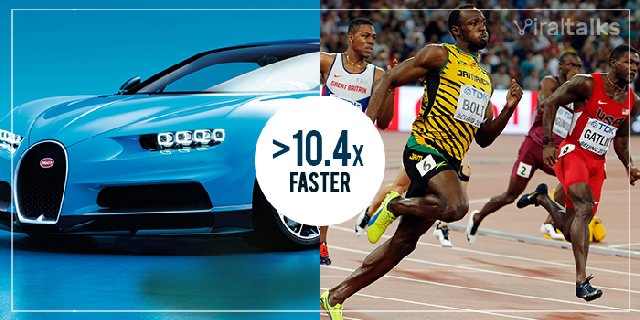 Although this one's a no-brainer, let's see how the fastest man alive, Usain Bolt fares against the Chiron. Bolt's top speed has been 44.72 km/h (27.8 mph) while the Chiron can reach from 0 to 60 mph (97 kph) in 2.4 seconds! Nevertheless, he could just own one and end it right there! 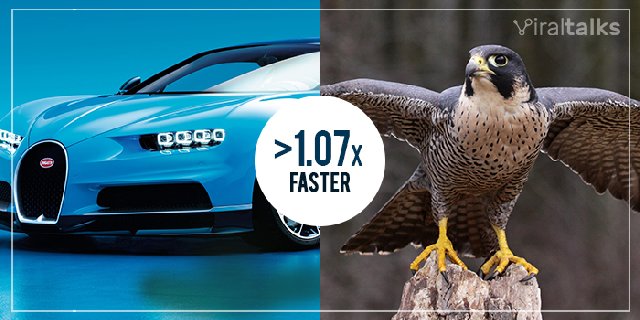 The Peregrine Falcon is known to be the fastest bird on the planet. It has been recorded to have reached and amazing speed of 390 km/h (242.3 mph). Still, the fastest flying creature isn't good enough to beat the Chiron!

7. Bugatti Chiron is 1.75 times faster than the fastest Roller Coaster 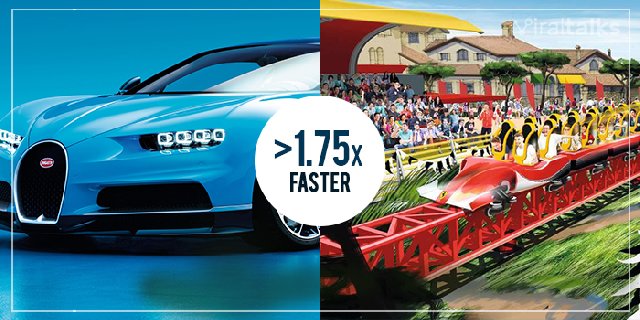 The fastest roller coaster in the world reaches a stomach twisting 239 kph (149 mph). It is in Abu Dhabi, Saudi Arabia at the Ferarri World and is called Formula Rossa. Yet it falls short by quite a bit against the meanest Bugatti yet!

8. Bugatti Chiron is 1.03 times faster than the fastest winds 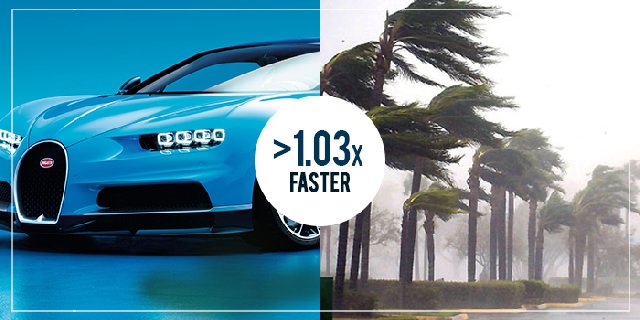 Australia's Barrow Island has winds blowing over it that have reached peak speeds of 407 kph (253 mph)! The Chiron narrowly edges out the fastest winds on the planet, nevertheless, it comes out on top against this one too! 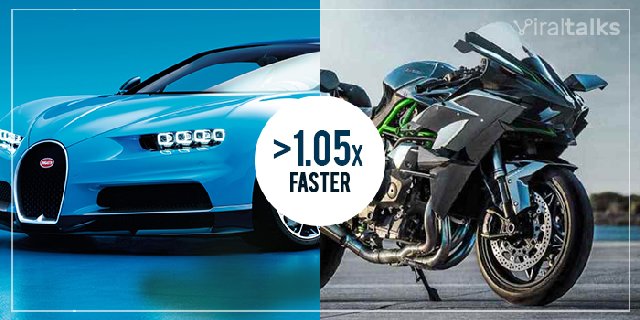 The Ninja H2R from Kawasaki is undoubtedly the fastest street legal bike in production. It can clock speeds of 400 kph (249 mph) but is not match to the Bugatti Chiron unfortunately. But a motorbike achieving such speeds is truly commendable!

10. Bugatti Chiron is 2.6 times faster that the mighty sneeze 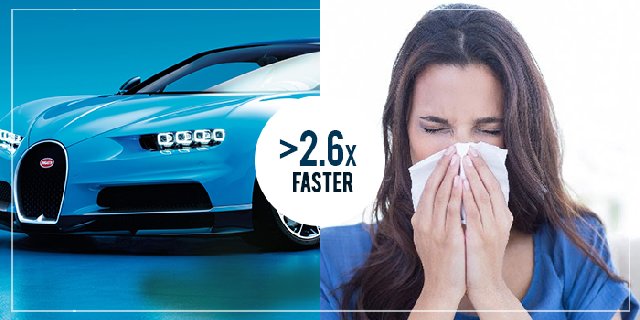 Did you know that a human's sneeze can, does travel at great speed? The fastest recorded sneeze speed is about 160 kph (100 mph). Although a tiny phenomenon, it packs quite a punch!

That brings us to the end of the comparison between the Bugatti Chiron with the rest of the things in the world that are known specifically for their speed, both man-made and natural. That was one heck of an adrenaline rush! Let us know what you make of this article in the comments/reactions section below!

These 13 Mishaps During Intercourse Could Ruin your Sex Life